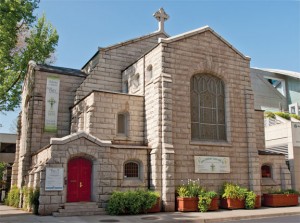 “Gold” is a magical word in the history of St. Paul’s. It was gold that brought adventurers to Sacramento, bringing folks who established the new city’s first church – in a blacksmith’s shop.

The year was 1849. That first church would become St. Paul’s Episcopal Church, now firmly planted at the corner of 15th and J Streets in downtown Sacramento. Built of solid granite, its cornerstone was laid in 1903 for a church that grew to be a spiritual center for many prominent Californians, including the Charles Crocker family and the Leland Stanfords. Both families contributed beautiful stained glass windows, highly regarded as treasures of the art. 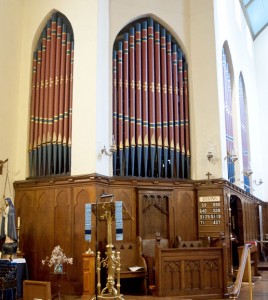 With traditional English stone church architecture, St. Paul’s is known for its fine acoustics and has been host to noted concert artists: Christ Church (Cambridge College) Men’s Choir, Sacramento Chamber Music Society and Sacramento Baroque Soloists among many. Even The Grateful Dead had a gig here, before they went on to brighter lights.

Organ buffs from around the country stop in to listen to our historic Johnson & Son Opus 503 Tracker organ.

During the Great Depression years, St. Paul’s was the Cathedral for the Diocese of Northern California. Then In the 1960s, our church became the Center for Urban Work and Study, the home of outreach and welfare programs for the diocese and the foundation for today’s Episcopal Community Services. 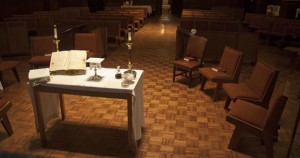 Now designated an official Historic Landmark, St. Paul’s opens wide its doors. We welcome our downtown neighbors, visitors to the Community Center next door and state workers who walk by our corner of Sacramento every day. We have noontime services weekdays and traditional services at 8:00 and 10:00 a.m. Sunday mornings.

Among the artistic treasures of St. Paul’s are our stained glass windows. As you face the altar, the window on the right in front is known as the Stanford Window. Commissioned by Leland and Jane Stanford in memory of their beloved son, Leland Jr., it has been called by one expert of the art, “ . . . one of the most beautiful stained glass windows existing in the world today.”

Telling the story of the young boy’s life and tragic death, the panel on the right depicts the morning angel carrying the baby Leland to the family’s home, the Stanford Mansion. The panel on the left depicts a grieving angel cutting a rose not yet in bloom. The central panel depicts the boy’s guardian angel assisting his entry into Paradise. A study of the window leaves the viewer feeling the intense love and sorrow of a mother for her son.

The window on the left is dedicated to St. Cecilia, the patron saint of musicians, in memory of Cornelia Alice Haymond, an early organist at St. Paul’s and member of an influential family in Sacramento.

Above the altar rises the window depicting the Ascension of Christ with a focus on prayer and meditation. It replaces one commissioned by Mrs. Charles Crocker, wife of the railroad baron, which was destroyed by fire in 1914.

Fire in the Organ 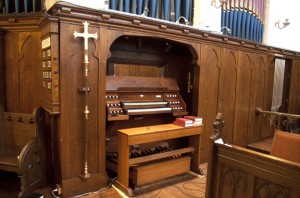 The fire began in the pipe organ, destroying the organ, the Crocker stained glass window and much of the north end of the church. The organ was replaced by a Tracker organ, built by Johnson & Son of Westfield, Mass. in 1877. The historic organ was brought to St. Paul’s in 1918 and remains one of the oldest organs on the west coast, considered a local treasure by the organ guild.